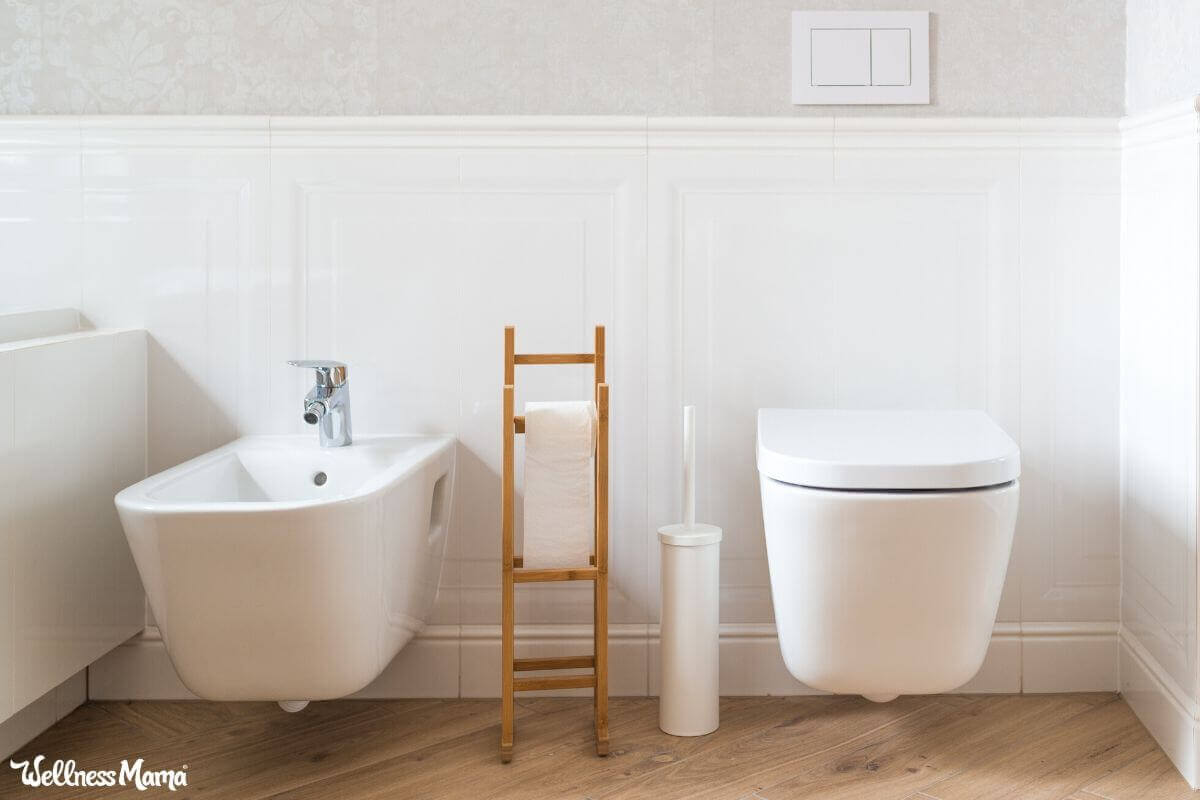 Menstrual cups are one of those things that may seem strange at first but you fall in love with eventually. The bidet may be another. The bidet isn’t that common in the United States but is gaining in popularity.

My husband and I travel quite a bit for work and have tried our fair share of bidets. Here’s the good, the bad, and the ugly and why we’re considering putting one in our home.

Might be perfect timing since we can’t find any toilet paper at the store!

What Is a Bidet?

The first bidet appeared in the 18th century in France. “Bidet” is a French word for “pony.” The idea is that you straddle the bidet the same way you would a pony.

At that time it was invented and for a while afterward, the bidet was used in the bedroom along with a chamber pot. In the early 20th century when modern plumbing came to be, the bidet moved to the bathroom.

Bidets are common in southern European countries like Italy, Spain, and Portugal where they’re now mandatory. They’re also popular in other European countries and in some parts of South America, South-East Asia, South Asia, Japan, and the Middle East.

The bidet comes in three main varieties. The stand-alone bidet, the bidet shower (also called a handheld bidet or bidet sprayer), and the add-on bidet. The one that you choose will depend on your needs.

The stand-alone bidet (also called a bidet toilet) looks like a low sink or water fountain (don’t drink from them!) that is often sitting right next to the toilet and takes up the same amount of space. It often has warm water and cold water knobs to adjust the temperature of the water.

Instead of having to install something new, an add-on bidet (also known as a bidet toilet seat) is an easy way to add one to your bathroom without a renovation. This is a small bidet attachment that goes on the toilet seat, or it can also be a new toilet seat with the bidet already attached. This bidet sprays water at the designated area with the touch of a button.

Some add-on bidets use cold water only. (It’s thought that the thin stream of water used won’t cause you to feel cold.) Others tie into hot water lines or heat water themselves. Some are electric and some are non-electric.

The bidet shower is a handheld plumbing fixture that’s a lot like the kitchen sink sprayer or a diaper sprayer. With this kind of bidet, you have to aim the bidet spray nozzle in the right direction. This handheld bidet sprayer can be difficult to use for people who have low mobility or injuries that make it difficult for them to do this. The bonus: it’s inexpensive and doesn’t usually require professional installation.

We actually had one of these for years for cleaning cloth diapers, but I never once thought about using it as a bidet!

Still not sure you’d try one? This model has an automatic seat, remote control, massaging wash, self-cleaning function, and even blows warm air for a truly clean and dry finish! If you take your “throne” seriously, this may be the one bidet for you.

The bidet is an unusual (and sometimes cringe-worthy) bathroom accessory for many Americans, but for others, they’re a new necessity. Some people who have traveled abroad discovered the bidet during their trip and became fans. Others can’t get over the strangeness of the idea. Still, others are somewhere in the middle.

Here are some of the reasons our European friends swear we’ll never go back to TP alone:

Most people agree that the bidet can give a better cleaning than toilet paper alone (especially if you’re using a water filter). And if you think about it, it makes sense. We use water to wash every other part of our body, why not the derriere? Many people are beginning to use wet wipes in place of dry toilet paper. They see the benefit of using water to clean up after using the toilet. The bidet is just another way of using water to achieve the cleanest clean.

Save Trees (and Money)

While many of us don’t think very much about toilet paper (or conserving it), the truth is we use a lot of toilet paper every year. Having a bidet doesn’t necessarily eliminate the need for toilet paper, but it can reduce it quite a bit. Americans use an average of 50 lbs of toilet paper a year. Compare that to the average of countries in Europe at about 23 lbs. Presumably, if we used the bidet in the U.S., we could reduce toilet paper consumption by about half.

There’s also the price to consider. Toilet paper is considered a staple so many don’t even acknowledge the cost. But the U.S. spends 6 billion dollars annually on toilet paper! Reducing toilet paper use could save a decent amount of money for each family or household.

One unexpected benefit of the bidet is that they can actually save water. Production of toilet paper uses a lot of water and if we reduce toilet paper use we also reduce water consumption.

Let’s do some math:

Good for Those With Limited Mobility

Using toilet paper is something that requires a certain level of flexibility and strength. This seems small to those of us that are fit and healthy but to others, it may be a concern. Some aging people or those with injuries or disabilities may be able to regain toilet independence with the use of a bidet. That can mean a huge improvement in the quality of life for these people!

For people who are prone to hemorrhoids, rashes or other issues that cause irritation, the bidet may be great. Women who have just given birth may benefit from using a bidet instead of toilet paper. Wiping with toilet paper can cause some irritation, and when irritation is already an issue, it can be hard to stay clean. Water, on the other hand, is soothing and a great cleaning agent.

Additionally, toilet paper may smear bacteria around instead of removing it. A 2017 study found that bidet use reduced hemorrhoids and urogenital infections.

Of course, there are also some drawbacks to the bidet. Here are some of the sticking points many people have when considering the switch.

Depending on the kind of bidet you’re after, the cost could be high. For example, if you have your heart set on a stand-alone bidet, the cost of the bidet itself isn’t the only thing to consider. Many bathrooms don’t already have space next to the toilet for a bidet, so a large renovation is likely needed. Even some add-on bidets can be hundreds of dollars. They have great features like heated water and timers, but you’ll pay for those. However, if you’re happy with a basic add-on bidet, the cost can be reasonable.

Whether it’s just feeling weird about the bidet, or the actual physical discomfort of adjusting to bidet use, some people can have a hard time getting over the weird feelings associated with the bidet. Americans, in general, have a negative association with the bidet. There are a few theories as to why. According to this article:

Also, Americans didn’t even like to talk about toilet paper for the longest time. Around 1930, the German paper company Hakle advertised their toilet paper with conservatism in mind, “Ask for a roll of Hakle and you won’t have to say toilet paper!” It would make sense that Americans simply didn’t know about the bidet until recently (or couldn’t deal with thinking about it!).

How to Use a Bidet

For those who are ready to give the bidet a try, here are the basics for using one.

There are many varieties of bidets so it’s best to read the directions for your specific bidet before using. Some have an adjustable spray, and other settings to investigate.

Bidets have gotten a bad rap in the U.S. (or no rap at all). But they may be a good choice as an alternative (or addition) to toilet paper. Bidets are hygienic (many would argue more so than toilet paper!) and save toilet paper. Toilet paper production costs a lot in water usage, wood, and energy to produce, so the bidet may be a perfect way to reduce our need for single-use products. They’re also simple to use once you get the hang of it!

Have you tried a bidet? Do you love or hate them (or fall somewhere in the middle)?

Make Your Own Natural Disinfectant Spray